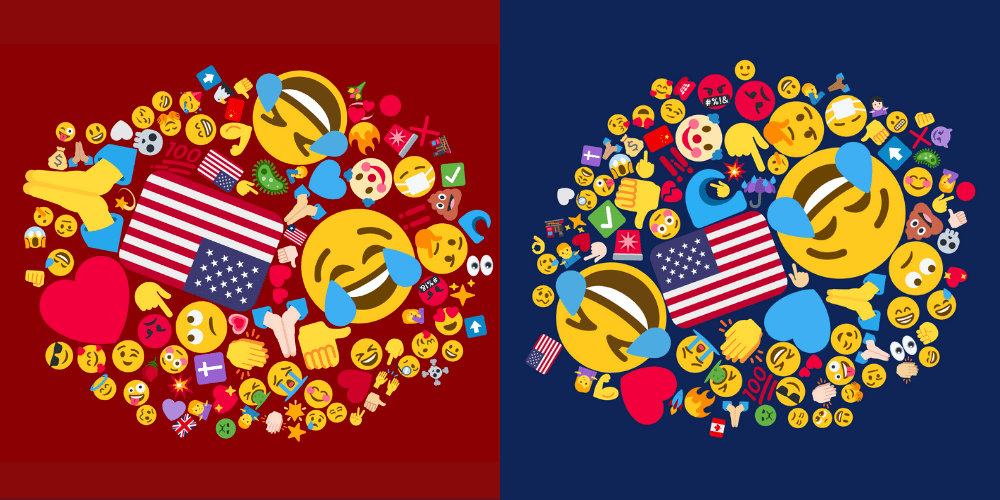 Emojis are useful not only when you want to express your feelings or emotions, they also could be used as a symbol for some topic, movement, or problem.

And they are often used for that.

Have you heard how On 18 June 2020 Facebook removed Trump ads displaying 🔻Red Triangle Pointed Down? Was it used as a Nazi political prisoners symbol by the Trump campaign or by his opponents?

Or how the ✊🏽✊🏾✊🏿Raised Fist Emojis used a symbol for Black Lives Matter movement?

Or the 🌈Rainbow first and then after 2016, the 🏳️‍🌈Rainbow Flag emojis are used as a symbol for Pride / LGBTQ+?

And just recently the 🎗️Reminder Ribbon was actively used in October as Breast Cancer Awareness Month.

Have you wondered how are emojis used in political campaigns?

To scratch that topic a bit, we have conducted an analysis of over 1M tweets related to the US Presidential election 2020.

After tweets were collected, they were grouped and analyzed by six different groups of keywords related to: 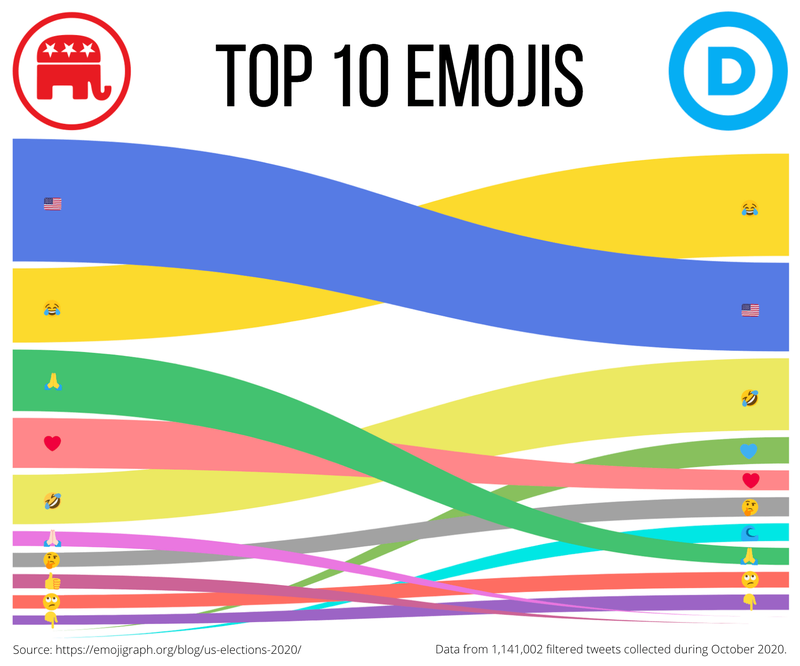 The 🇺🇸 Flag: United States emoji is the most popular emoji in the Donald Trump campaign group (15.00% of tweets) and is in second place(10.83%) in the Joe Biden campaign group.

The 🤣 Rolling on the Floor Laughing and the 😂 Face with Tears of Joy emojis are constantly one of the most used on Twitter. It worth to note those have higher ranks in Biden's group.

Does it mean that people who tweeted using the Trump campaign group keywords are more religious? If we look at the 🙏🏼Folded Hands: Medium-Light Skin Tone and the ✝️Latin Cross emojis share in the sample, it will be more than twice larger in the Donald Trump campaign tweets group.

The ❤️ Red Heart is in 4th place in Trump campaign group (6.11%) and on 5th in Biden(2.44%). It's widely used as one of the most popular emoji across Twitter, but have a much bigger share in Trump campaign tweets as red color is associated with Republicans.

When the 💙 Blue Heart emoji is not so popular as ❤️ Red Heart on Twitter in general, but when it comes to the Democratic party this emoji is in 4th place, and only on 13 in Trump campaign tweets.

One emoji that looks quite organically at the top in those politically related tweets is the 🤔 Thinking Face.

The 🌊 Water Wave is used as the symbol for a "Blue Wave" by Democratic Party supporters and is in 7th place in Biden campaign group.

The 👍 Thumbs Up ranked 8 in Trump campaign group and 11 in Biden.

And the 🙄 Face with Rolling Eyes and the 👇 Backhand Index Pointing Down are the only emojis with the same rank in both groups. 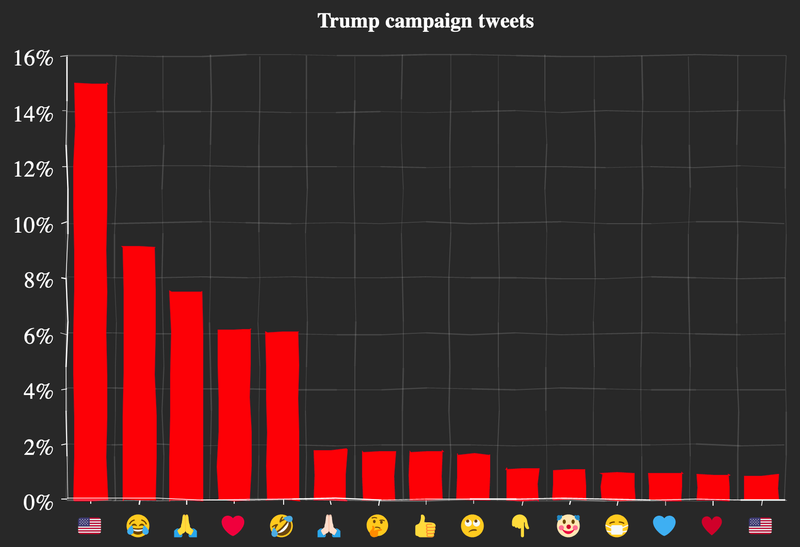 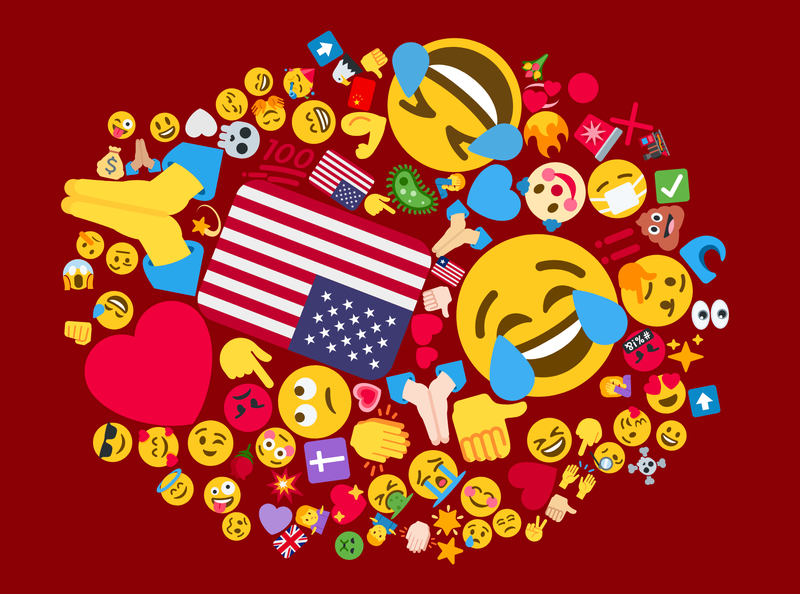 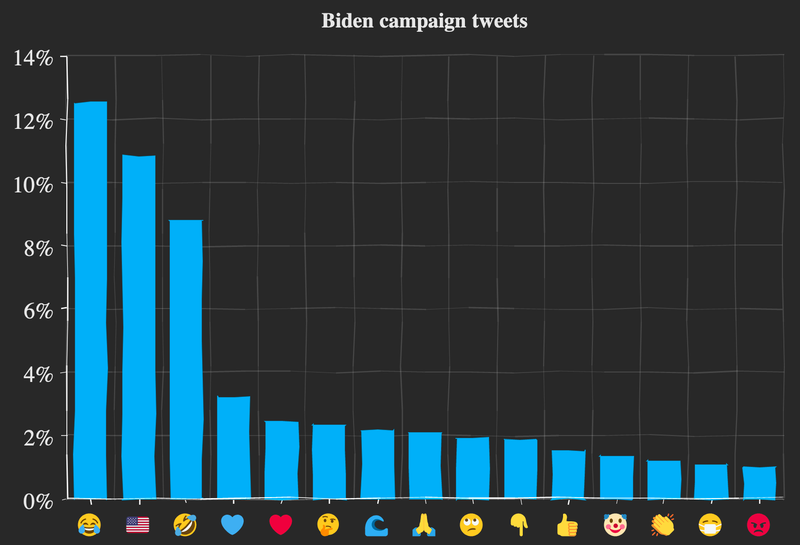 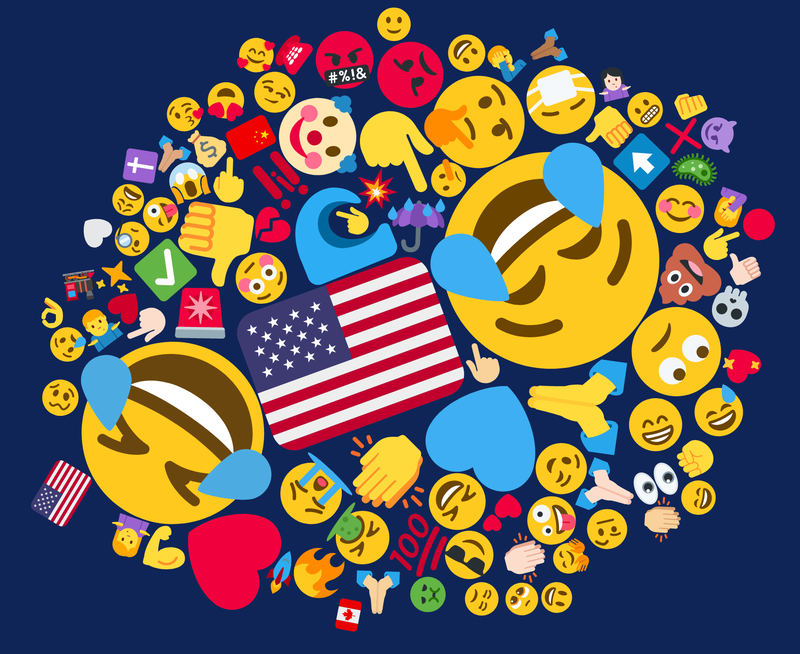 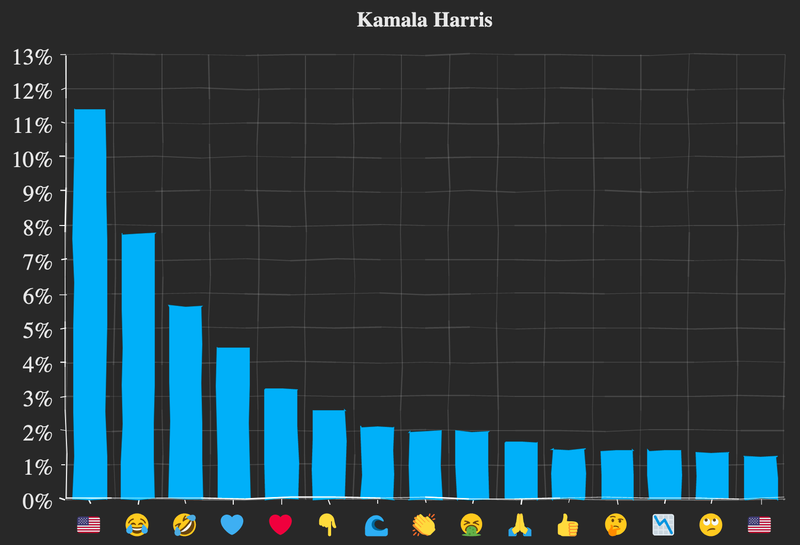 Here are some differences from other tweets groups.

The 👏Clapping Hands emoji is in 8th place.

The 🤮Face Vomiting on 9th place, thanks to 7 hateful tweets to @KamalaHarris, that have spammed that emoji in the text.

The 📉Chart Decreasing emoji on 13th place here compared to 100+ in other groups. 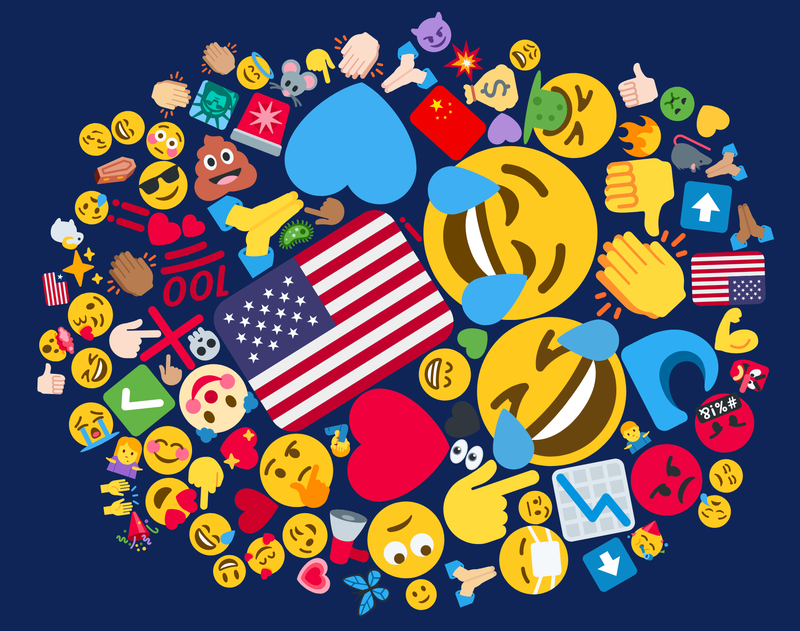 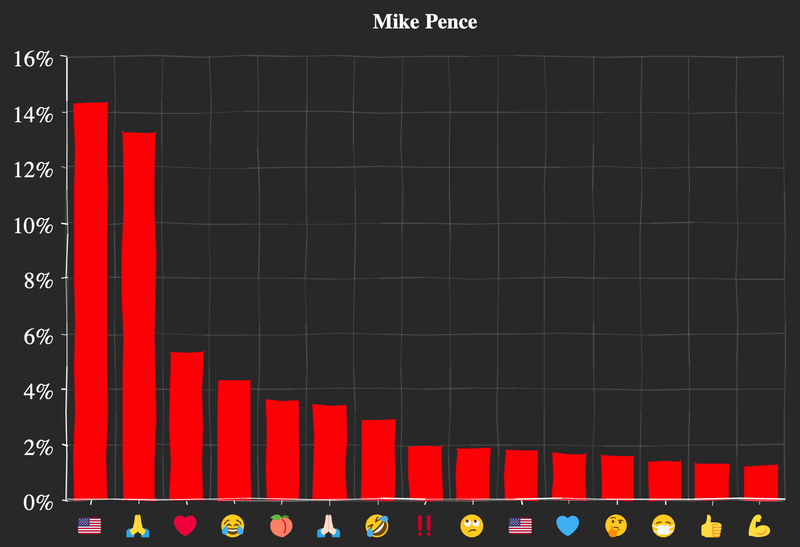 The 🍑Peach is in 5th place mainly thanks to the tweets like: 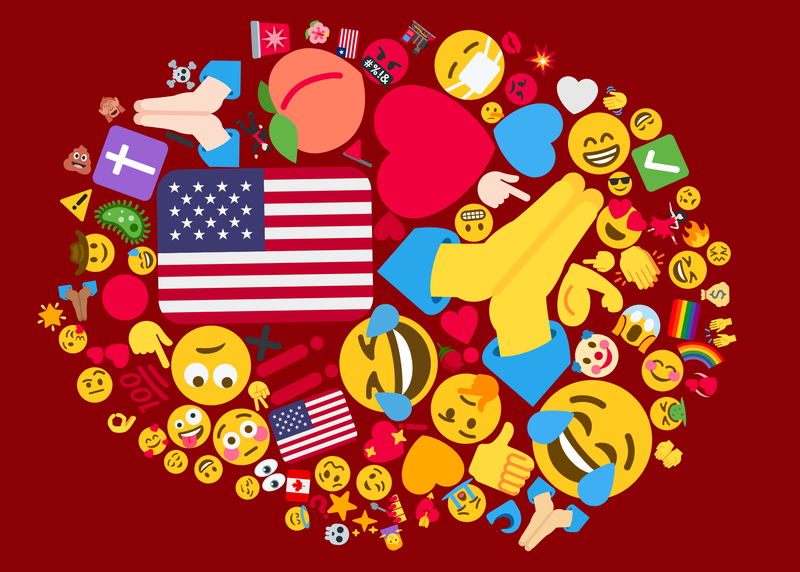 We made sentiment analysis for each tweet group using the pretrained Logistic Regression model from Kaggle with 82% accuracy.
Note: This model is doing rough estimations.

The model predicts 0 if it thinks a tweet is negative, or 1 if positive.

From the team at Emojigraph 🤍🇺🇸🤍